The Birth of an Ancient Tradition ?
Tradition reflects.  Often worn smooth by habit, it requires a second glance to recognise the original needs that spurred its development.  Every pagan ritual was devised by very contemporary pagans. 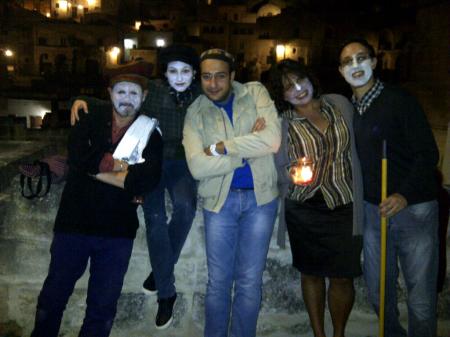 The Stations
of the Storytellers
Heaven forbid that we have Our First unMiracle.
Theatre works in mysterious ways:  it takes but the simplest of human ingredients (including the essential factor of the audience’s capacity to be transported), and moments of great beauty can transpire.  We did it.   Just barely.

At the event of Living on the Edge, the 3rd Edgeryder gathering: we were doing exactly that.  Perched in the last of the clusters of abandoned peasant and artisan cave dwellings before the stone Sassi quarters of the town of Matera are swallowed by the ravine, all roads lead down towards us.  Along the steep paths up to the city above, are to be found many an exquisite backdrop.

The call went out.  Ramona answered. Could we locate 10-15 local residents to re-inhabit their traditional residences and provide two minute anecdotes from their family history to what ever passersby we could manage to drum up?  Recruitment works best one on one.  Talking to people at the Pasta Party seemed a good strategy.
In the end, we had a bare minimum.  In the end, the fledgling unMonastery community didn’t consider themselves sufficiently alerted to the power latent in the culture stuff.  In the end, it was exceptionally charming and potent.  In the end, it is only a beginning…

This highly replicable ultra-human ritual of recounting the stories from the lives of our ancestors has now been placed in the loving hands of local culture workers.  With a small amount (2 years?) considered nurturing from the unMo, (as say the receptive end-zone party location) it should take root in the fertile soil of the community imagination.  It is highly possible that our ritual archeologist team have unearthed our first forgotten tradition:

One appropriate spot, one local citizen, one candle, two minutes to recount a small story to passersby.  Multiplied by 10-15, the dynamic forms and light shifts of the passages between the half restored habitats stubbornly clinging to the outside of the ancient fortress wall would supply more than enough scenic backdrop. With sound shoes, the winding trip from the top of the steps by the Cathedral to the edge of the ravine should take but ten minutes – unless you were stopped upon the way.   The recruitment of good reasons to stop may or may not prove a challenge…

My unMonastery residency had not yet strictly started. The mother organisation had gathered en masse, but bitterly hammering out The unRules of our unMonastic unOrder, we were still in an adamant in-house development phase. We weren’t intending to be open for business. However, such an ideal opportunity to try out a core idea of my residential proposal of cyclical meet the community bi-weekly feasts wouldn’t come around for another 26 fortnights…

The hillside town of Matera has attracted the visually seduceable before; renowned cinematographers often summons its gnarled lanes as a stand-in for biblical times. Our work was closer to the now, and on October 31st had an additional impetus. Falling well within the mandate of my Society for the Promotion of Human Rites was the unassuming goal to demonstratively repel the insidious global pressure that replicates the fouler manifestations of the Made in USA distortion of All Souls Night. When more innocent Edgeryder voices aired the idea to arrange a suspiciously sounding “unHalloween Party”, it was now or never. One more year and the necessary effort to quell the encroachment might quadruple.

Of course, it was stunt theatre.  Of course, with 20 minutes to launch time, all but one of the vaguely promised participants had shone in their absence.  Of course, the Plan C, reflex disaster modus of transforming an elegant group installation into a frantic solo sketch would not have been a very pleasant sight…

Miracles are miracles. At the last second, up popped two players from the local gruppe di teatro. At an even later second, two of the Edgeryder lads allowed themselves to be pressed in slapping on some white face. To launch such a delicate ritual required a moment of political consciousness – two of the to-be-installed were not of this parish. The request was raised to bestow upon them temporary status of honorary Materiani.  The required nods were obtained.

Snatching a useful prop or two, we set out to people the pathway. I had scouted the route by day and found at least 14 useful spots. Now we were 6.  Some stray jars had mysteriously appeared from beneath a bush; filled with a candle we had sufficient beacons to lead the walking audience up a dark alley. We were stretched to the limit. Each of us had would cover some 40-50 meters of shadowy door openings. Andrea and Nadia changed the route on me as we marched – their choice was better.
(*a key moment when it became clear for them that the visiting director had no interest at all in monitoring their content – and that of course speaking silly English was not at all appropriate – the essence of the project was that they would be trusted to speak from their hearts.)

geeks become actors
Pascale was the find of the evening. A local lad who had almost joined the LOTE meeting on the sly, he was lent a small hat and placed in the middle of a long steep stair. His story was earth-bound: of the manner in which his family prepared the bread for the week.  The audience was stragglers: a few of our conference participants who perhaps acknowledged that the cultural interface was the first manifestation of our collective designs. Interspersed were a few gaggles of local adolescents. In groups of two to five they were sent off into the night. In the distance, the first candle illuminated an incidental pair of young lovers.

The work of the piece was perhaps more complex than its performance. The recipe was a recipe. The individual spice brought by the performers could be ever so subtle; the voice of the stones provided all necessary amplification. Those that walked the walk met either a charming installation of local colour (if they didn’t speak Italian), or a vital aspect of their collective history.  Those who participated were overwhelmed by the purity of the performing experience.  Recruitment shouldn’t be a challenge next year.