Community development projects cannot thrive in a sterile environment.  They have to be sown, to germinate and to take root before they can grow.  The juried project proposal system that sifts the pure genius from the less pure genius does just that; the proposed projects are descriptions of the applicant’s imagination.  Suddenly surrounded by reality, that same imagination should be encouraged to evolve something radically different.

It is written somewhere in the unMo literature that projects are to be shattered upon arrival.  It is written somewhere in the literature that itinerant unMonasterians are to create their existence human contact by human contact.   Parachuting in with our pre-formed beliefs leaves us with a mentality of adjusting the terrain to fit the map.
Healthier for all concerned is to perform an illuminating arrival ceremony of burning ones preconceptions and application text.  If, at some point in the future, the charred remnants may be dredged forth from one’s memory, they are thereby all the more valuable.  However, it is equally legitimate to build a completely other project.  — It is carved somewhere on the unMo walls that we should “Listen always to what is emerging”.

Massive projects can get heavy.  Delivering deliverables can evoke tunnel vision.  The stubborn spectre of perfectionism can rear its head; projects artificially supported by conceptual scaffolding can get all bad mannered and unruly in the face of reality.
To counteract this the preferred project management device is the articulation of sub-objectives with which to illuminate the day to day occurrences which nourish the project environment.   In the unMo, part of this articulation is instinctive; however our grand mission can get easily obscured by pressing immediate concerns. So while the way of the world encourages independence, performance and cleverness, we unMonasterians risk a quick extinction unless we employ human skills that foster camaraderie, generosity, and deep inter-reliance.  Taking the time to articulate the need to cultivate these inner workings that support all our efforts is a vital step.  Our greater PROJECTS are to be constructed of progettini.

I Progettini are the connective tissue of life in the project world: they are the conscious choices that align our availability and project our willingness to listen.

Two Performing Poodles:  Next and the Kids
They’ve dragged me out of my cave again:  the unMo headliner bit in the TED-style aren’t-we-wonderful live broadcast “Next” thing needed a finale; then the following day at 11:00 some youngsters were dropping by unAnnounced … 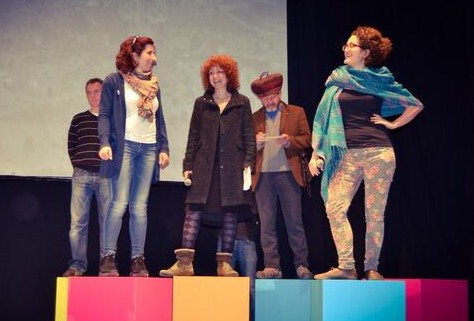 The first one was easy — my chore to provide the closing number for the team asked to explain themselves in under a minute.  It could be a distinct advantage that one of us was trained in how to flip a standardised comment to gain an introductory half-laugh, and to milk a bilingual pause for all that it is worth.  That he willingly wore a silly hat and was wary enough of his sight lines to take the brave step forward even if it left him standing somewhat ridiculously astride the designated colourful cubes of two co-workers, didn’t hurt either.  Everybody had something to say, I was briefest and last.  Helpful pens had whittled down my tourist Italiano to a rather succinct message:

That the moderate jubilation that followed was less for my cutting-edge poetry and more for my mangled Italiano will go uncommented upon.  At my frequency – a gig is a gig.

The other task wracked more nerves.  Poised to exit the premises the next morning on a promising developmental mission, I was blocked by an impending reality:  ‘an unSpecified number of children were on their way to the gates of the unMonastery to do an unSpecified thing.’  No one seemed to know whose brilliant idea this was.  The common opinion was that the house would indeed survive without me, but frankly no one seemed to be bustling with whatever it is that one bustles with upon such occasions.  Resigned to my fate, I sat back down.  The breakfast discussion rolled further, laundry was laundered, as the clock passed the estimated time of arrival nothing notable occurred.

Suddenly the air was full of kid-stuff.  Adults exercising their hushing, young voices giving them reason to do so…

The Laundry Project had turned up a forgotten treasure in the bottom of my cupboard —  Brussels: three Edgeryder gatherings ago, in the early morning of the unMonastery Dream, we had had been blessed with a budget for catering.  As I recall the meals were neither fragrant nor filling.  What they did provide was an unusual amount of quality designer rubbish.  I’d pocketed a few sets of the wooden cutlery, but taken particular umbrage at the exquisite sticks used to skewer our panini.  With a head full of freshly mined Lore of the unMonastery, they spoke to the shaman in me.  I gathered 40 or so skewers into a plastic bag and carted them home for future reference…

Over a year later, as the unMo neared becoming a reality, my economic situation encouraged me to rent out my flat.  Cleaning up for my tenant, I came across a vaguely familiar bag and quickly moved it into my heap of Matera bound gear.  Recycling the shadowy spirit of dreamtime past into fodder for the urgent unearthing of palatable truths is a time-honoured dramaturgical strategy: the sticks would prove good for something; A melts into B.

I ran out to meet the arriving school class: (decidedly more than imagined, inevitably accompanied by their own camera team, and at that most delightful age of 7 or so.)
Let the games begin: I’d be clutching at whatever was at hand.  In this case it was my precious Belgian skewers:  I thought they could provide a forest of pins; each with its mock black olive at convenient maximum manipulation length, they could invade a garden or provide involuntary acupuncture treatment for any number of public monuments; they had sword-fight potential.  In the event, everyone was more that pleased to try proposal number three: take them home and stick them in your grandmother’s favorite cushion…

Time had been won; we had established a relationship – the primary obligations of the photo op were more than met.  Strangely enough the Progettinisto in me couldn’t let the opportunity slip by.  Given that our one of deepest goals is to foster feelings of ownership for unMonastery Matera among the local populous, embedding a herd of already bubbling young local citizens with an acute desire to return for more was the only justifiable move.

The crowd expanded to absorb the physical feedback potential (aka play) of the terrace that soars over the valley.  Using the classic maneuver of recruiting one young volunteer under 25 kg to be unmercifully lifted into the air by her ears — I convincingly gathered them once again into an eager clump. 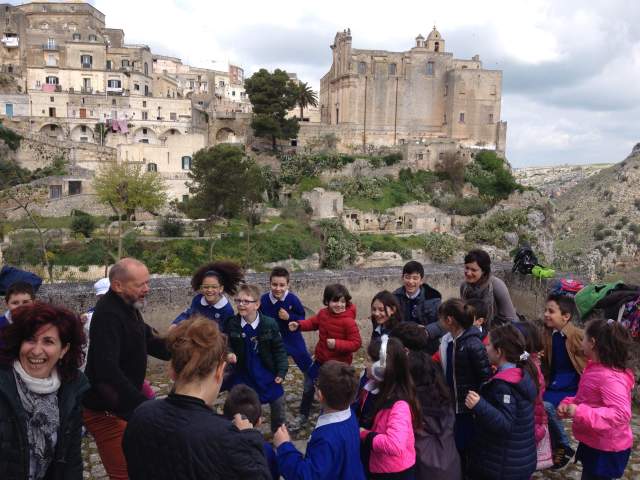 Alternatives reduced to one — I took the easy road off the cliff face by starting an improvised Morning Practice session:  Everyone see if they can locate their legs.
Once found: rhythmic thigh slaps.  This established: foot pounding with appropriate integrated grunts.  Now thoroughly grounded in their skeletal mountain: a big round transcendent stretch of the upper extremities with a resounding whoop.

While the high concentration of attendant adults breathed a collective sigh of relief that I hadn’t damaged any delicate souls, the kids wanted more…  Still not breaching decorum, I pulled out an available finger.  Soon everyone had found one too.  A small amount of translation and everyone understood that this was a vermicelli – a small worm.  These sang, wiggled and talked with their neighbours; when another one appeared they tended towards curiosity, argument and then wrestling.

With all the blessings of The Gods of Theatre the satisfying grande finale presented itself.  Session complete, another Progettino was suitable for framing.

Theatre worker who long ago abandoned theatres, I remain adept at fabricating projects out of thin air. All proposals welcome.
View all posts by bembodavies →
This entry was posted in Uncategorized and tagged Next, progettini, unMonastery. Bookmark the permalink.