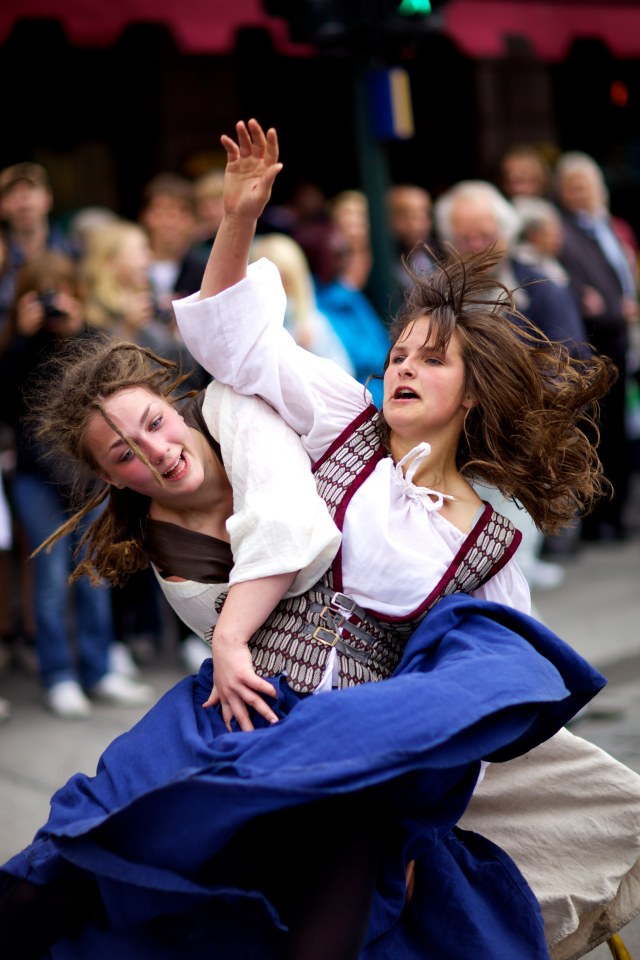 I sobbed deeply at the theatre yesterday.  It has happened before, although twenty years in the wilderness is a long time to be left yearning.  Then, as now, the criteria was not incessant brilliant invention, nor some external esthetic cleverness.  The element that so moves this over-exposed theatre veteran is a variant upon pure, wise good work.
That this is accompanied by the sheer stubbornness of the practitioners who insist upon addressing deep theatre truths despite the threatening clouds of an engineered cultural austerity, may not have been a coincidence…

Even in the unconvincing local excuse for a summer, a very human impulse to free life from the confines of ventilation duct and light socket dependency displaces people into any available patch of nature.  Stella Polaris have been feeding this impulse for thirty years; they meet a pressing human need.  Locating themselves upon perhaps the rawest, least commercial plot of land they can find, their work is consciously and adamantly naive.  They employ no nodding distance, conceptual adroitness, bitter irony, nor indeed doubleness of any sort: what you get is what they give.  They give a lot.

Their annual summer solstice gathering is now held by the grave of Olav Bigbones, a Viking king whose burial goods and war ship have also fallen victim to the fashion of cultural centralisering.  Wedged between motorway and railway line, only his empty mound remains surrounded with just enough sanctified grainfields. (Most of the locals I quizzed had never stopped to read the info-posters – including a report of recent forensic examination that reveals that the man himself suffered an unusual genetic abnormality that justified both his name and reputation.)

As fitting such an environment, human sacrifice was involved.  The juvenile participants being worked into the flows of the troupe’s ritual for their first year were not merely added colour and body count…  Their contribution is a prerequisite for the next layer of the pyramid.

A free event involving 10-15 core group members, augmented by 50-60 appropriately costumed workshop participants aged 7 – 60, could legitimately been boiled down to a symbolic, superficial affair with a subtext of not much more than: Isn’t this lovely fun?
We would have been thankful enough for the 20 minute ritual prayer to the winds, but that was just an opening statement of intentions.  Stella Polaris weren’t just going to artfully indicate the significance of the occasion – they will precipitate it.  Their belief in personal energy transformation and renewal is demonstrably non-fiction.  Over the next three and a half hours they would unfold eight times as much material in seeking to blast a hole in the firmament that might rebalance the universe.  This cannot be subtle.

The theatre of Stella Polaris is tribal art; it is not modern interpretive expression of the individual.  The dynamics of this incarnation of their street pieces build upon the infectious glee of mastering physical challenges.  The story is that of the assembled ‘us’; there can be no stars.  Carried by the power of the ensemble, the individual foot-soldier is mercifully expendable; everyone contributes their very best, the tribe prospers, as participant  you emerge with unique capacities to engage with your surroundings.

It costs: the team sheds; a newly expanded supernova cannot always thrive during the winter of grant applications.  SP has spawned satellite mini-projects; market-tailored one or two person story-telling meteorites that reflect the mother troupe’s pre-industrial themes.  As theatre, these don’t always do SP proud – the skills of the street may not completely inform the skills of the bonfire; deprived of its drumbeat and vocal wall of frenzied supporters, the acting can seem untutored.  However, skill level is not about skill level.  It is about acquiring fresh powers. The explosions which highlight their performances may not be honed artistry, but rather more basic human raw materials: glee, conviction, belonging.  The solos can easily vanish in the whirl – they are not the point.

SP have a few well-worn tricks: their pieces don’t stay still.  Building to one crescendo, they shift space every 12 minutes: launching the phalanx of their parade right through the established centre of the action they fold the audience back upon ourselves.   We, the spectators, scatter in self-defense; free to renegotiate our relationship, we inevitably gather closer, and more eagerly.  The SP dramaturgy rarely uses silence – transitions are grabbed and squeezed for all they are worth.  At each juncture, a seemingly well-aged routine captures the air: snippets of forgotten songs in many languages, circus leaps, flags and fireworks.

If Stella Polaris do elegant transitions it is accidental.  At the pace they operate, they don’t supplicate their art to the Gods of Esthetics. Rather they wrestle esthetics into irrelevance.  That their costumes are not new, the choreography predictably unpredictable, the scenic elements recycled, is not a minus.  People are gathered; fresh souls grouped into five totem clans are making fresh connections with their inner powers…

Their trademark magic ingredient is the fresh blood of unfolding youth — traveling with an ensemble of seventy isn’t always possible, the SP nomadic workshop is the perfect solution.  A certain percentage of those on stage look very familiar indeed – three days of training in songs, dance, and the demolition of personal boundaries is all that is desirable; the trial by fire of playing before your own people gives the performance that extra edge of the impossible.  When twice things sagged, the troupe has its primary matriarchal pillar who lurches forward to carry the company over the breech of a choppy transition or a faltering tempo (often caused by a moment of disbelief in the miracle of it all); she whips the energy back up a notch in a patchwork of song snippets or discordant harmonies applied as well placed encouragement.  We must climb further.

Contemporary theatre doesn’t always love anthropology.  The fact (disputed by some, though never by me) that we have performed theatre rituals to transmit key survival skills from a time that pre-dates human speech, puts enormous demands upon those who dare take their responsibility seriously.

If Stella Polaris is not unique globally, one must travel as far as they have. (The revived community rituals of some Pacific islands come to mind.)  It is definitely a unique national cultural treasure in Norway.  The way has been hard.  They don’t fit in the current assessment of the non-hierarchical marginal theatre/performance concept projects that equates innovation with youth.  Stella Polaris is not about innovation, but rather renovation.  That the core strength of their work has evolved through the distilled wisdom of life-long journey as lovingly and nakedly commented by Per Spildra Borg.  In his ‘Life Theatre’ brochure documenting their achievements and influences these first 30 years he documents a profound meeting; Per travels upon belief more than administrative guile.

At the Gokstad burial mound, SP were accompanied by an odd grassroots movement of some six couples of tented pensioners.  Suitably garbed in hand-woven finery, they set up camp with a lived-in museum of Viking pastimes and handicrafts.   The young and their elders provided an ideal amplification for one another.

The political ups and downs of the theatre industry periodically strip the troupe of its momentum.   SP can never be project theatre:  it is a school and a lifestyle.  Young people fall through the doorway – become altered for life and grow unto the point where they must expand their search.  That which is SPs immediate loss becomes culture Norges gain.  Ex-ADHD patients having survived the initiations rites and partaken of cultural exchange at the far reaches of their known world, reappear as familiar faces on children’s television and the pop charts; satellite theatre troupes form.  Periodically, elements return to the mother group for massive projects, such as the 2005 Poland tour of The Ship of Fools that put 25 people on stage.

The physical/vocal work that the Stella Polaris tribe embraces is infectious. The SP performers speak their own language – they don’t ‘do acting’, but unlike the other performance artists of their generation, they don’t do measured minimalism either.  If anything, they do ‘maximalism’.  In the SP school of generosity, they emit pure energy; they give of themselves.  Dramaturgically, the summer/street pieces are not sophisticated:  they establish spatial focus through a mass song or direct speech, and then explode in a barrage of colour, sound and acrobatics.  Their stories are subliminally about ‘us’. The sub-plot of every SP show is the same: we are those wonderful pure souls that you read about, our friendships have enabled us to explore our limitlessness, with the help of the audience we will become even more deeply human.  Almost always, the not-so-secret ingredient is fresh local blood being astonished as the repertoire supplied by the scattered veteran core members in their midst, carry the newly convened group to areas where they palpably overcome themselves.

It is not the fashion of the art industry to speak of culture as social therapy.  Such things may be frowned upon by the café crowd, but the proof of the ensemble may be felt behind the scenes as well: the SP young people don’t flutter on from their dirty plates after meal times.  They cook, and de-rig and care for one another with the same attention with which they build their performances.

Stella Polaris’s is an unusual virtuosity.  One brilliant human is immaterial; in the Theatre of the Mob the art lies in gathering the masses:  seventy is truer than twenty.  Their language is simple:  infectious generosity.