remit:  When he heard of the unMonastery project, local co-working social activist, Giorgio Baracco, took an impulsive trip to Athens to inquire if we could be interested in a massive project:  his historically pivotal city of Alessandria at the edge of the Piedmont floodplains had a reflex reaction to pesky foreigners…   Concrete actions:  (down at the bottom)

Alessandria has previous: when their fierce defense caused Holy Roman Emperor Frederik Barbarossa to pull out some medieval hair, he changed the name of the city to Keizer – the locals reinstated it at first opportunity; when Napoleon Bonaparte routed the Austria-Hungarian forces, and underlined his disapproval of the papacy by ripping out the local Cathedral, a taller, vaguely finger-shaped spire was erected on the rebuild; when what is diplomatically designated anglo-American forces fire-bombed the beloved classical theatre edifice that had long been the social nucleus of the class that counts, it would damn well be resurrected bigger and better…

The house is cavernous.  Built at a time when the largest theatre in Italy was something to crow over, it is now as viable as a sandal maker for Mastodons.  Location is everything; if it didn’t occupy the centre piece end of the green wooded square facing the railway station, it could be quietly let out cut-price to IKEA.  Closed five years ago after an operational error had spread a nasty batch of asbestos powder through the entire ventilation system, it may soon be nearing a partially functional level.

Problem however, is what to fill it with: who of the locals have the vision, media pull and international contact network to be able to pack the building with significant reasons to climb out of your favorite sofa?  The framed stars of yesteryear that tradition decrees must smile at you from the stairwells are no longer such pleasant company – the current generation  of their replacements certainly don’t shine as convincingly.

Options
The two – three most grand spaces have an architecture that takes the breath away.  The main foyer stretches long and rises high.  Looking down on it, are at least one elegant mezzanine gallery.  The backstage of the main theatre with a fly space 26m high is as inspiring as any cathedral.  Its massive wooden floor is an unknown commodity in the modern age.

Both these spaces should be considered common property of the populous.  Beautiful operations could be performed there.  If three hundred people a day get to stand stage front and centre, everyone in the city can experience this once a year.  Rationalise this down to thirty people, and each citizen gets several photo ops in a lifetime.  As a monument to the transcendental powers of cooperative effort that theatre personifies, the house cries out for intense human activity.

In the meantime the building has been hit with yet another sort of bomb.  Off-limits while work teams remove its immediate chemical toxicity, the city itself went through the embarrassing honour of being Italy’s first municipality to be rendered legally bankrupt. Funds acquired to refurbish its innards in the direction of past glory may just pull it back to square one, but at this juncture, rebuilding even more bigger and better can no longer be a useful operating principle.  These twin devastations, economic and environmental, require a unique future oriented response.  The city is not alone in this dilemma; if it could generate the consciousness to respond in a smarter, subtle manner it could truly become a monument of international importance.

The Culture of the Enterprise
— an unMonastic approach —

A municipal cultural institution of this size represents some 15-20 salaried and politely pensioned positions in a well-worn hierarchy.  This is a lot of patronage, influence peddling and jostling of egos — such schemes rarely generate world-shaking art.

The soonish to be reopened massive municipal theatre needs a raison d’être; I was witness to two gatherings to test the waters.  The first, dry and predictable in an antechamber at the city hall, invited the local self-styled theatre types to air which of their plans could inhabit the building.  The second, potentially equally dry and predicable, gave them one more chance; it asked the apposite question: given that local self-styled theatre types only had use for 10-15% of the building’s capacity — what else would you like your actors/audience to experience here?

The most intricate gathering during my one-man scoping mission to determine if Alessandria was fertile ground for unMonasticism was the last.  Invited to co-working space:  Lab121 were some repeat faces from the cramped roundtable gathering in the city hall to discuss their desires as local theatricians.  Giorgio and I had a rough meeting plan. Start with something not too challenging, but angled as if everyone among us was an experienced actor; assess their own contribution, and then bore them a bit.  Then as they went into the familiar positions, try to lead their thinking outside the boxing ring…

Operetta for the Provinces
The pull to trump past heights is deeply ingrained in the local populous.  Now, when the modern scourges of asbestos fibres and the downside of deficit financing had besieged the biggest theatre stage in Italy.  Voices clamoured for the restoration of past splendor.

But could this possibly swing?  Designed in the heady days of cheap oil and shaky two-tone television reception, it had served as a convenient stop-over for national tours plying the well-worn circuit across the lucrative North.  The fare: charming clunkers featuring stout defenders of the faith.

Our meeting was designed to stay low key.  Premature visionary design can trigger ingrained nostalgic expectations.   The inflated role of imported whiz person could easily generate the usual gang of suspicions: resentment, passivity, intransigence, and a militant ‘wait and see attitude’ that we know only too well.

Having budgeted with twenty minutes of at best predictable circular discussion – we would then pull the plug and raise the directed focus of the discussions.  We retreated earlier than planned-  thinking we’d better remove the foreigner factor as much as possible, Giorgio would play my earnest straight man in the local dialect.  We gathered around the ubiquitous il business model canvas:  it did its trick – within less than the allotted time we were heavily bogged down in consultant jargon and spinning out of control.

Asked persuasively to introduce my mission, I, with an authorised translator by my side, succumbed with an anecdote.   I told the story of a café meeting Lars during his visit to the unMonastery prototype in Matera.  He told of a business management professor who had based his doctoral studies upon the one large institution that always delivered as promised right on the predetermined minute of opening night: the theatre.  I had stood up from our table, moved 120 cm to my right, shook and wept —  Someone somewhere had acknowledged the depth of our knowledge:

Theatre is a Rehearsal for life:
Skills and disciplines are exercised
that are of acute importance for a functional society.
Not the inflation of the need for self-expression:
the easy, noisy bits, il teatro dello sperleffo;
not the fantasy extensions of storytelling and veiled fable,
but the invisible knowledges and clear truths.
The most important message of the theatre is subliminal:
the miracle of the ensemble and the extreme sport of the collective.
— Group breathing, group confrontation, group transcendence.

teatro com museo attivo
It may not have been diplomatic to describe a beloved institution as a dinosaur, but everyone conceded that this was by no means underestimating the size of the problem. While larger monuments may exist in a few spots around the globe, at issue wasn’t even if there was available nourishment enough to support such an endangered species — refurbishing the same scale drain on the municipal budget in an age where gentlemen ceased to go with Borsalinos* would clearly be an act of fiscal mismanagement.  Better a humane assisted death and some inspired use of its skeleton in a manner that includes a larger selection of the audience that the historic opera-goers.  The collision would be with the traditionalists.
*Alessandria is the ancestral home of this hat-making empire. 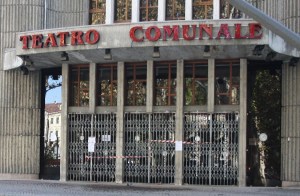 Expectations can paralyse many a cause. Catering to nostalgia is much easier that feeding people unknowns.  Dramatic shifts in focus are often necessary to lift the discussion past the familiar logjams. Adjustment was in order —  some familiar words dominated the airwaves of our meeting: teatro and spettacolo were clearly being used as a shorthand.   If we continue to say and think teatro –  the only imaginable deliverables are dance, concerts, musicals and comic farces.  To diffuse this, I interrupted.  In trade lingo, we’d always talk of our operation as not ‘the theatre’, but ’the house’ – was this translatable?  Yes, in Italian it was also ‘la casa’ .  Would this help re-proportion expectations?

The strong graphic presence at the foot of the park announces:  “Teatro___Comunale” with an unnaturally large space between words.  It cries out for vandalismo; over a series of café tables we plotted a tagging design:  T-super-C, T-post-C, T-avanti-C were voiced and rejected.  My informants, more soaked in the local argot than I, had to be listened to. The current favorite, that definitely needs go before a marketing poll, simply hacks two letters out of the second word making something close to Community become Common — Teatro Comune.  No longer the municipal showcase, it becomes of the people.

Two interventions addressed the ‘model’ itself.  I interrupted: Stakeholders are obvious, don’t spend the time on this, although please note that in the unMonastery we learned to include the invisible stakeholders – the Future.  Also, the language proffered by the standard exercise board used at the Co-working Lab was too tame and academic; the flimsy claims as to moments of concern were not the language of the theatre… In the theatre we need to use strong, playable verbs to describe our actions :  You are speaking careful of tentative proposals: we need to embrace dreams…