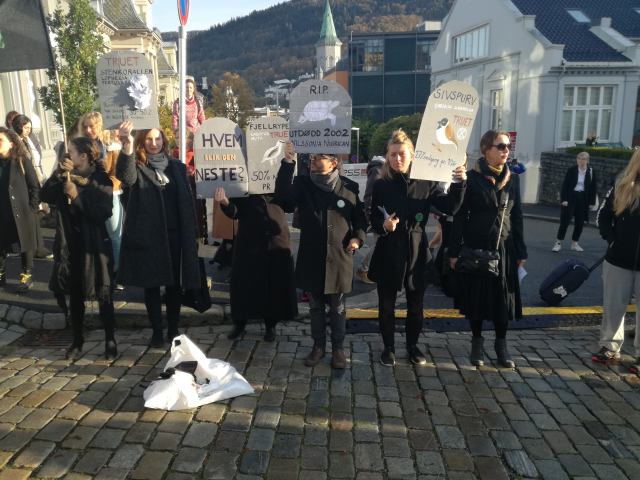 Art by committee can be questionable amounts of fun. Hopefully, the grand idea
gets propped up from multiple directions; but it can easily take a democratic pummeling.
A project’s success may depend less upon one clear image, than a capacity to revel
in the raw variety of human expression…

The local team of eXtinction Rebellion had a mission: one the city’s more magnificent palaces, designed to celebrate the previous previous century’s benign attitude towards species extinction, had had a refurbishment. After six years behind scaffolding, one of the town’s signature buildings would reopen. A hometown girl, the Prime Minister herself, would come to regale us with at least one charming anecdote in her warming native dialect.  Despite crisp morning sunlight mercifully visiting our strip of coast for the occasion, she reminded us of a different, damper reality. Visiting her grandparents’ flat just down the hill, could generate much pent up child energy:  the family cure for a rainy Sunday was — the Bergen Natural History Museum. Built in a more edifying era, when social beneficence was marked, not by shuffling off to an tax haven, but by raising a self-aggrandising cathedral popular; many in the crowd nodded when the PM noted the pinnacle of her trip was always the grand hall at the top of the stairs. Generations had gazed skywards into a suspended whale skeleton.

The irony was not lost upon XR. We had come prepared: among the twelve delicately chiseled mock tombstones was perhaps our pièce de la resistance: the Atlantic Grey Whale. Coincidently, the extinction date carved into our gravestone was identical with the building dates for the original museum. In a pun that resonated a bit better before translation, we declared the whale as ‘deeply missed’. 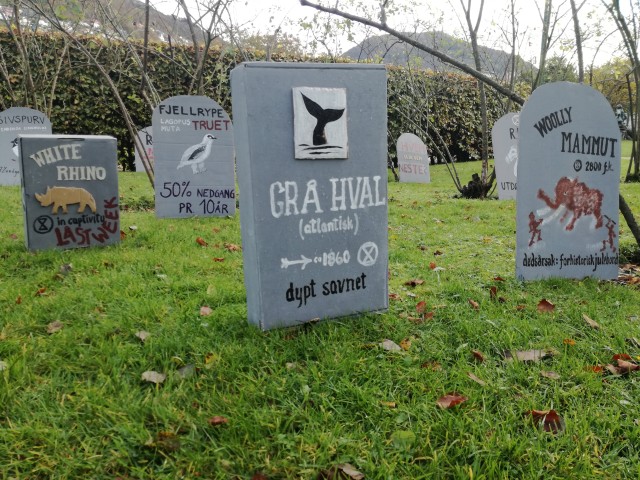 Bring your own paparazzi
The goals of poetic protest are delicate. The meta-image has to feed multiple depths of field at the same time; while it has to be instantly decipherable for the journalistic panorama, the subjective close-up has to be calibrated to the focal length of an individual by-passer. Your interface is everywhere.

We had trawled our chosen metaphor with some care. The grandeur of the temple featuring stuffed animals from the golden years of colonialism could easily overshadow the precarity of less humble species of today. While the museum’s vaults held a world renowned collection of bumblebees; recent field trips in the region indicated a massive cut in prevalent species. Our central complainte was had the museum reserved sufficient space for upcoming generations ?

The XR central message is ‘Face the Facts‘. We would both mourn the already passed, and warn of the pressing situation for creatures on the endangered list. Our gathering of gravestones included dramatic classics such as the dodo, and the most recent addition of the single remaining male white rhino who’s death had been reported three days earlier. We also regretfully made at least tentative gravestones for the threatened ash tree, local coral fields, and some beloved mountain birds. 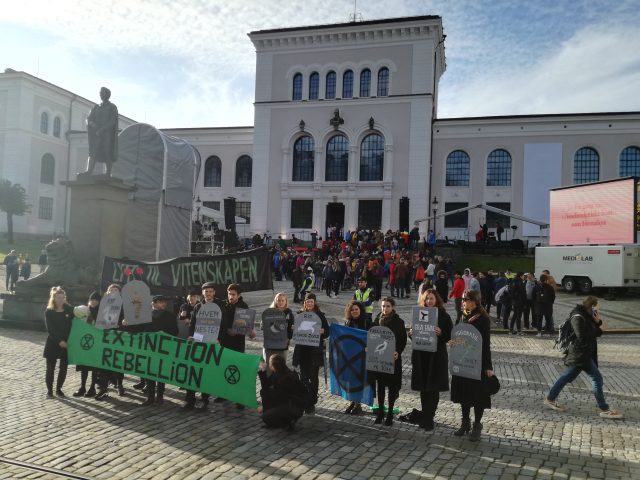 Designing Demos
The XR ‘artivist’ workshop had deftly jettisoned the central committee’s more cumbersome commission of pallbearers supporting a casket (even with the lightest available corpse.) While human extinction may provide eerie background music, as a unifying image it seemed more prudent to wait in queue behind other species nearer an afterlife aided by taxidermy.  Internally, some confusion reigned: could we mourn the future without summonsing the sorrow for past species? One visit to a local graveyard, provided some clues: among the carefully cultivated recent arrivals, were the intelligible moss-covered remnants from previous centuries. A good funeral provides context. What’s gone is gone, but it is not to be forgotten.

Much as every menu needs umami, good propaganda embraces its own critique. A viable slogan isn’t as much pronounced — as distilled within the recipient. Purity of message has its virtue, but an oft repeated slogan can quickly fall into self-righteous monotony. It is wiser to assemble the elements of a vision through point and counterpoint: among the savoury or bitter, a touch of sweetness… [ see our video of the 1990 prototype: Future Protection Agency : Sweet and Sour Demonstration Relay. ]

But this remains not self-evident to all. Responsibility for the daily operations of a touring circus are divided among two castes: the Kinkers and the Roustabouts. The Roustabouts raise the tent, pop the popcorn, sell the tickets; the Kinkers perform.  Although it is obvious that neither could exist without the other, neither seemingly approve of the other’s lifestyle. Similarly, healthy political organs cannot be dominated by the Roundheads. To exclude either poets or number crunchers, is to invite a stultifying narrowness in favour of temporary stability.  Designing your interface to orchestrate accessibility to both friend and foe is vital. 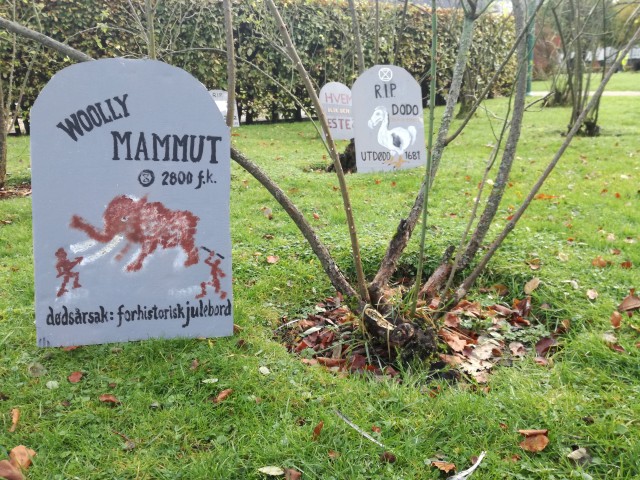 Active Irresistibility?
Abandoning a central element in our briefing, the XR team perhaps overstepped their boundaries when they deceitfully penetrated the VIP section of the gathering in the museum square. Wearing appropriate mourning black, we thought ourselves indistinguishable from the attending guests and university employees let loose for the occasion. However, our numbers, and the tell-tale placards may just have given us away.  Ever watchful, a local constable had for some reason decided that a conversation with me would be well worth his time. I’m afraid he overestimated me ( or under-estimated the value of his time); he got a respectful earful. In the back of my mind I scanned the precepts of the Extinction Rebellion Non-violent Action training programme that I’d recently attended. I vaguely recalled that it decreed minimal cooperation; however, this didn’t seem the most viable option here.  Instead of passive aggressive passivity, I deftly switched into hyper cooperative modus; judging that the more that I wrapped up his time enthusiastically filling his head with my newly acquired wikipedia of salient facts about extinct species, he’d a) have less time to go in search of the others, and b) he might deduce that we were a harmless bunch of well-meaning kooks. I think I succeeded…

I did remember to deceive him a little bit: I denied belonging to an organisation. It would be hard to call us organised, no one has ever extracted membership fees; technically we were rather a group of incidental friends coincidently sporting matching cardboard gravestones. Oddly, he wasn’t that interested in the fine print of my protest sign (it included a discrete XR logo), our convivial tone was such that he had to endure me reverse-interrogating him about his childhood connection to the museum’s whale display, and my mock apologies for being the one carrying the most light-hearted sign that mourned neither flora nor fauna — but rather the recent demise of the Norwegian National Railway. 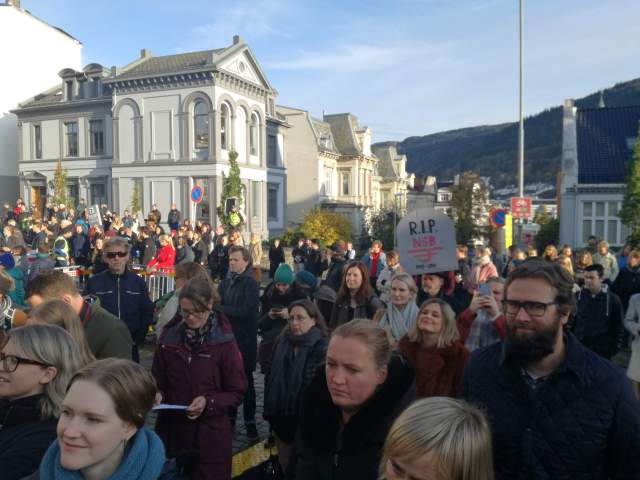 Hidden away in the minutæ of our demonstration paraphernalia, was a thematic anomaly.  For some it was a jarring inconsistency, deviant from the party line; for others it reflected an übernorsk salient detail that added a poignant punch with significant aftertaste. It mourned the passing of a very human creation; NSB, the national railway system had been disassembled this past year by the day’s guest of honour.  The conventions of the graveyard’s streamlined minimalism allowed us to bear our grief expressed in six letters, one award-winning logo and the telling dates 1905-2019  (1905 being a magic number etched into the racial memory of Norwegian nationals everywhere.)  As an expression of yearning for the recently departed, it clearly hit a palpable nerve among the assembled masses.

Listening Stations
The sub-goals of street theatre can be subtle. The non-subtle bit is of course to draw attention to the cause; however, once one has captured attention – what does one do with it?  Part of the thought process behind the Institute for Non-toxic Propaganda is that much of the work is best done one on one. Instead of confronting people with your appraisal of their contradictions, you adroitly reverse your status; by allowing oneself to become victim of one’s own imagery, you tactically invite passers-by to appraise you being confronted by your own contradictions. If we are all in it together, everyone’s logical conclusions are somehow equally relevant. I call these staged interactions: listening stations. We are out collecting the inevitable conflicting arguments.  The more we the performer are the victim of our performance, the more we empower the point of view of the observer. Once you have established this human bridge, defensiveness often evaporates in the face of our innocence; deep systemic doubts can be aired and implanted in the vicinity of the audience’s core beliefs — without rudely hammering home your own conclusions. 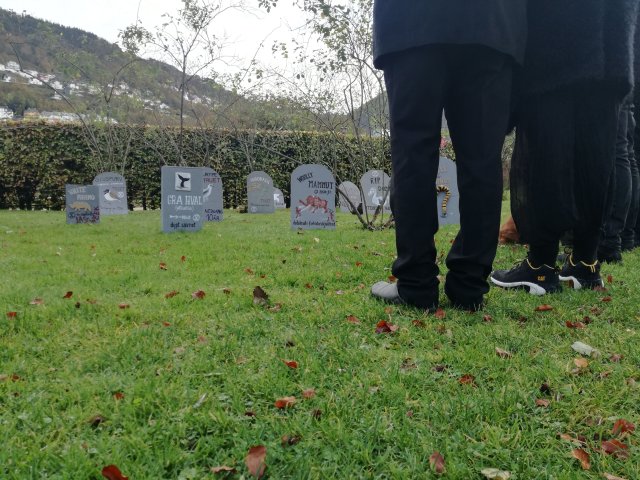 Of course, we momentarily became a cause celébre on the hidden reaches of the local media; for some reason the minor flutter of a few metaphorical hankies became the lead story:  XR visits a dignitary

all photos: Odin the one-eyed